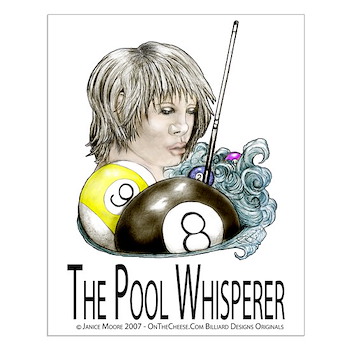 About The Billiard Art of Janice Moore

About The Billiard Art of Janice Moore

Follow The OTC Billiard Mouse... and "jayce the pool mouse" to find the Pool Room Posters you want to need.

A Short Billiard History Of Pool In Art: Famous Artists

Michael Godard
The imaginative antics of artist Michael Godard bubble up with humor in his 8 ball designed martini glasses surrounded by humanized olives with cue sticks in hand challenging a pool shark to a game of pool.
Hal Hurst
Hal Hurst (1865–1938) was an English painter, etcher, miniaturist, illustrator and adds his romantic touch to Billiard Art in two pieces available for sale on this page in Miss in Baulk and Taking a Rest
Vincent van Gogh
Vincent van Gogh (1853 – 1890) was a Dutch post-Impressionist Master and one of the most influential artists of the 19th century. Remarkably, despite being a prolific artist Van Gogh only sold one painting during his lifetime.
Thomas Rowlandson
Thomas Rowlandson (1756- 1827) enters our overview of billiard art history with one of the most recognizable figures in Georgian caricature. Demonstrating his healthy and quite cheeky sense of humor resulted in the comic creation of the character of the inimitable Doctor Syntax as witnessed in his illustration, The billiard table' from the book 'Doctor Syntax's Tour in Search of a Wife'

by William Combe was first published in 1821 and originally done in watercolors. The collaboration of Thomas Rowlandson as illustrator and William Combe as writer entertained Georgian Society for quite some time. read more about: The Adventures of Doctor Syntax

Jean-Baptiste Simeon Chardin
Jean-Baptiste-Siméon Chardin (French, 1699 – 1779) was an 18th-century French painter considered a master of still life noted for his genre paintings as show on this page in Paris: Billiards, 1725
John O'brien
During the Civil War, billiard sports coverage of game results had a larger audience than war news. Cartoonist John O'brien a long time cartoon artist for the New Yorker Magazine makes light of this phenomenon of history in his cartoon Military general says, 'We Got Winners!' in War Room while other's play war in Georgia. Fellow New Yorker cartoonist Jack Ziegler's gag cartoon depicts the masked ex-Texas Ranger known to all as The Lone Ranger who, with his Indian friend Tonto, fights injustice in the American Old West taking a break after a long retirement Tonto tries to give instruction to the Lone Ranger in a game of pool is one of the funniest comic narrative art pieces in Billiard Art history.

Shopping online and need some advice on what to buy for a pool player? Billiard posters by OTC Billiard Designs are great gift ideas for the Christmas gift giving season.

And More!
Visit our store